Just like any other other type of boiler, be it gas or oil, a system of radiators and network of pipework has to be installed with all the necessary safety cut off devices. This is particularly important with wood burning boilers as these stoves will continue to fire even in the event of a power cut. In addition, it is necessary to ensure good gravity circulation in the event of a pump failure so it is important that the pipe-work is of a suitable size for a gravity circuit and that the pipes rise continuously. Horizontal runs and pipe-work dropping down through the floor and into a cellar should be avoided for this reason because if the pump fails the boiling hot water will not be able to gravitate naturally upwards which could lead to serious consequences! 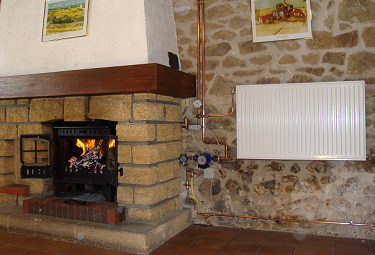 It’s not always easy to ensure even distribution of heat through very large areas or rooms (over 100m3). The size and shape of the room and the positioning of wood-burner should be carefully considered before deciding to use a single appliance even if apparently large enough.

Most of us in France though will have a nice (usually large) open fire place crying out for a wood-burner. If you want to evenly heat a large area or indeed several rooms as well as provide for domestic hot water, then it is possible to do so with the right wood-burning stove or cooker. These are called ‘boiler’ model stoves & cookers, and there are primarily two kinds;

those with an integral (wraparound) boiler which is formed as part of the stove body itself,
and
those with ‘clip-in’ boilers which can be added to most makes of stove (even if you have a stove already, it’s likely that the manufacturer will have a ‘clip-in’ boiler that could be retro-fitted to your stove).

It’s worth noting that integral boiler model stoves have a far greater output capacity than the “clip-in” types, although a clip in type boiler stove will usually give more direct heat to the room. Range cookers such as Rayburns can have either option depending on whether you want to heat just a DHW tank or a central heating circuit (or both). The Rayburn featured here shows good gravity circulation pipe work using 32mm gravity flow and return pipes connected to a French pressurised gravity heated hot water cylinder. The Rayburn was all so connected to an underfloor central heating circuit. 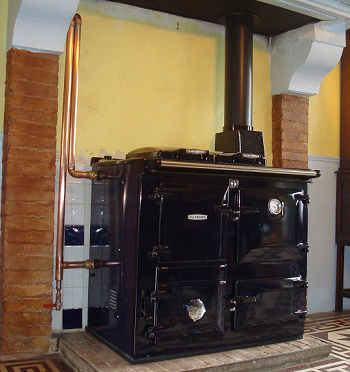 All stoves manufacturers will quote the output of their stoves either in kilowatts or BTU’s (British Thermal Units). Always bear in mind that these outputs usually reflect the stoves MAXIMUM capability using well seasoned wood. This maximum output can mean the maximum obtainable output of the appliance which included the heat output lost to the flue, or it could mean the maximum permissible output of the appliance depending on who you are speaking to. This being said, all of our range of British stoves will have been independently tested in an approved laboratory using a standard test fuel such as beech logs. The actual test regime will vary depending on the appliance type, but in all cases the relevant British Standard Testing Procedure is followed. Manufacturers usually state the required output of their stove products and, depending on the fuel load, the testing laboratory will try to achieve the results requested by the manufacturer. The results are then issued in a test report given to the manufacturer and the figures stated therein will for the basis for their product marketing.

When you buy a boiler model stove you have to consider the amount of heat that you will need to power the radiators as well as considering the demand for a domestic hot water supply if you plan to use your stove to heat a hot water cylinder. With this in mind, if you choose a room heater with a high output boiler, careful consideration has to be given to the effect on direct room heating output when the total connected ‘heat load’ is below the rated output of the appliance. In other words, the ratio between direct room heating and the boiler output is proportional. In addition you need to specify a stove to heat the number of radiators required. To small a boiler and the radiators will not get hot enough. To large a boiler for the number of radiators and it will run too hot and 'kettle' continuously as it boils off the excess heat in the expansion tank.

If you need more heat to be generated in a large room where the stove is fitted, you may have to consider fitting radiators (or a supplementary means of heating such as convector heaters) in order maintain the room temperature to a comfortable level. These sort of calculations would normally be carried by an engineer in order to determine your requirements which include factoring in heat loss on pipe runs, etc. but it’s important to give careful consideration to these issues at the outset before buying a stove and having one installed. If you have good insulation then your heat loss from the building can be minimised and you will not require so many kilowatts to heat it. Many home owners overlook this point and spend a fortune trying to heat their home with a constant supply of wood, which, during a freezing winter, will burn through quicker than it is able to do and sufficient room heating!


Linking your boiler stove into your existing central heating.

A boiler stove can be linked to an existing or new central heating system, either on its own or in conjunction with an existing oil or gas central heating system. This can be achieved several ways by using a basic non-return valve set up or a more complex thermal storage tank which acts as a neutral point for the hot water generated by the two appliances which is then circulated around the radiator circuit by the central heating pump. Remember though that you still need a good gravity circuit in order to dissipate the excess heat generated by the boiler in the event of a power failure and some existing central heating circuits which were designed for oil and gas may not be suitable without extensive modifications. Some stoves and range cookers have an internal cooling circuit fed by cold mains water so that in the event of overheating in the boiler the boiling water can be safely evacuated whilst a corresponding amount of could water enters into the boiler subsequently cooling it. This process continues until the pump is restored. It's a good idea to have an audible or visual warning if this happens so that you can be aware of this fault should it occur.

Using your boiler stove for heating and/or hot water

As we have already discussed, when you require the fitting of a new central heating system to be powered by your woodburner, it is advisable to consider the fitting of a fully pumped system to a gravity conducive circuit. Despite the system being fully pumped it is still necessary to ensure some gravity fed circulation, preferably to the cylinder or is more the case in France, a significant part of the radiator circuit which is NOT fitted with thermostatic valve heads. Under these circumstances some heat and hot water can be obtained during such failure and the system can continue to operate safely until power is restored. 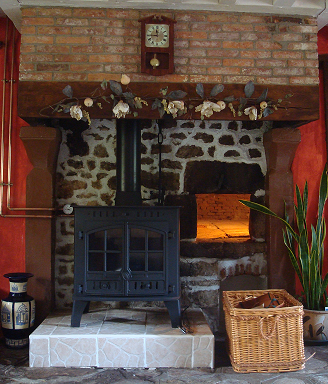 Have a well designed system

To design and install a good system requires a full understanding of solid fuel heating systems and how they operate. It is important to contact a solid fuel specialist like Stovesellers rather than a sanitary plumber masquerading as a solid fuel heating engineer. Even many gas and oil engineers simply do not understand all of the principles involved with this kind of system even though the may sound pretty convincing. We at Stovesellers have been asked many times to sort out the mess of other tradesmens work which was simply not good or safe enough so check thoroughly that your engineer is up to the job.

New regulations for France from 2015

As of 2015 all wood burning stove installers need to be professionally qualified (RGE) to do this sort of work and it's our guess that many plumbers who currently carry out wood burning installations will not be properly qualified or insured. What's more, the client will not be able to benefit from the generous French fiscal advantages such as the Tax Credit or Eco prét if the installer is not qualified. Check this with your prospective installer before you sign his devis to start work or you may regret it!

The domestic hot water cylinders used on solid fuel type installations should always be of the double feed indirect type. Don’t attempt to try to connect this to your electric chauffe eau!
In order to prevent the risk of “localised” boiling, it is necessary to position the hot water cylinder or radiator to enable gravity circulation to take place when the circulating pump is off or the power supply interrupted.
Some control packages require the installation of a motorised valve/s within the gravity circuit, and if this is the case the valve must return to the fully open position when the power is switched off or interrupted.
Even though the system will be safe if an open vent is provided, the provision of a gravity circuit will avoid the inconvenience of the system boiling and allow some use of the system in the event of a power failure.

Here at www.stovesellers.com we aim to have the most up-to-date and correct information about all of our stoves online. However, technical and aesthetic features of the stoves we supply may change and without forewarning. We reserve the right to notify you of any such changes at the time of sale, and to change the content of this site accordingly at any time.